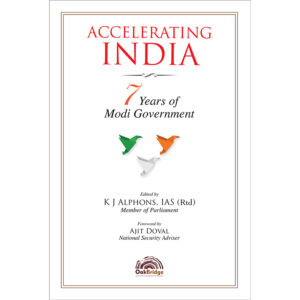 Accelerating India: 7 Years of Modi Government qualitatively and quantitatively evaluates the policies of the government in the last 7 years and their impact on the citizens and the nation. The book focuses on twenty-five key sectors, including Education, Digital Revolution, Agriculture, Industry, Energy, Infrastructure, Health, Economy, Environment, Rural Development, and Sanitation. Each chapter is contributed by domain experts and eminent civil servants with experience in the sector, giving their insights and understanding on the influence and impact of the various government policies and schemes in accelerating India. Some of these sectors have witnessed a complete overhaul, while others have been streamlined to bring inefficiency. The book aims to present an objective and empirical analysis of the journey that the Indian democracy has traversed under the leadership of the Prime Minister and the road ahead in each of the sectoral domains covered.

J. Alphons, from the 1979 batch of the Indian Administrative Service, quit and joined politics in 2006. He is currently a Member of the Indian Parliament. During his tenure as Tourism Minister of India, from 2017 to 2019, India rose to the 3rd rank in global tourism, as per the Global Travel and Tourism Council. He was also minister of State for Electronics and Information Technology. He rose to national prominence as an effective administrator and anti-corruption crusader. As the Commissioner of the Delhi Development Authority, he demolished 14,310 illegal buildings. These actions earned him the title, ‘The Demolition Man’. He pioneered the literacy movement in India by making Kottayam India’s 1st 100% literate town. The mass contact program he started as District Collector won the highest UN award for innovation in governance.

He was on the list of 100 Young Global Leaders of TIME Magazine, along with Bill Gates, Steve Jobs, etc. Those who have listened to him vouch that he is an outstanding orator. He is also a motivational speaker. He is a best-selling author. In this book, he invites the nation’s top administrators, technocrats, and policymakers to share their detailed analysis of Modi’s government and what to look forward to.

There are no reviews yet.

Only logged in customers who have purchased this product may leave a review.

Copyright © 2023 All Rights Reserved by OakBridge | Designed By EDYYO